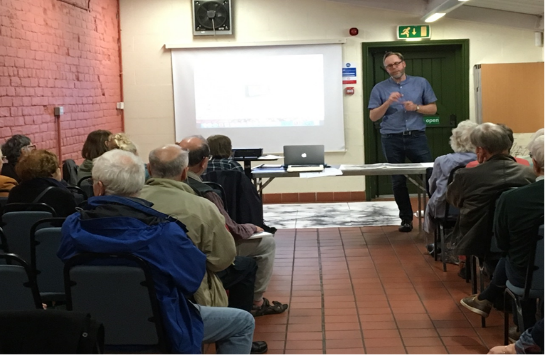 Ian began his presentation for the evening by providing a flavour of the work that led up to his collaborative exhibition with Birmingham University entitled ‘The Sketchbook and the Collider’.

Ian’s earlier works were very diverse, drawing from his formative life experiences, his sketched observations on the death of his father from emphysema followed by his reactions through his art when dealing with his mother’s failing health following her diagnosis of dementia.   He was particularly keen to describe the effect of these life events on his approach to art at the time.

He has worked both on his own account and in a number of collaborations to produce some extremely thought-provoking work. Examples include a brief obsession with plug holes, still life with macabre overtones and even a moving installation involving 122 redundant food trays provided through the closure of BHS.

His early work also displayed a committed to exhibiting in non-art spaces where he set out to reach a different audience from the usual gallery going public. On a personal note I loved the idea that Ian could have a finished installation, complete with its own lighting, set up and ready to display in the boot of his car. He could stop anywhere and just open the boot to provide a mobile exhibition of his work.

Ian then co-founded, with Sarah Fortes Mayer, the community arts group In-Public which was formed to provide support on a whole variety of projects working with a range of diverse partners. The physics workshops held in conjunction with the involvement and support of the University of Birmingham neatly melded this community arts work together with Ian’s personal practice. The workshops to schools provided a simplified approach for school children to understand just some elements of the myriad of particles that whiz about in the ether.

The Sketchbook and the Collider: Collision Event came about through a meeting of minds with particle physicist Prof. Kostas Nikolopoulos at the University of Birmingham:  Ian was artist in residence in 2018.  Sub-atomic interactions are only accessible to view by examining traces left in an enabling medium within a detector. Ian is a true artist with ideas and emotions laid bare through the installations and drawings that he produces by manipulating materials to create his works of art.

As Ian stated ‘the processes make the invisible, visible’. Indeed, the physicist’s relationship to their detectors has striking parallels with the relationship of the artist to their media and methods. A collaboration was born and the results speak for themselves with the amazing visual works produced by Ian.

Prof. Kostas Nikolopoulos and Ian have since co-authored an academic paper (Introducing particle physics concepts through visual art) and they have also further refined and developed the workshops exploring the relationship between fine art and particle physics.

Ian also demonstrated that he has a talent for drawing beautiful and engaging portraits and evidenced a high level of skill using the medium of chalk pens on tissue in the form of his hand drawn books.

The evening was very well supported and I think everyone enjoyed the way in which Ian presented such a complicated and fascinating topic.

I am hopeful that Ian will be able to keep in touch and keep us informed of how things move forward both with this project and future art projects that he becomes involved with.

If you would like to discover more about Ian’s work for yourself then please take a look using the following links: