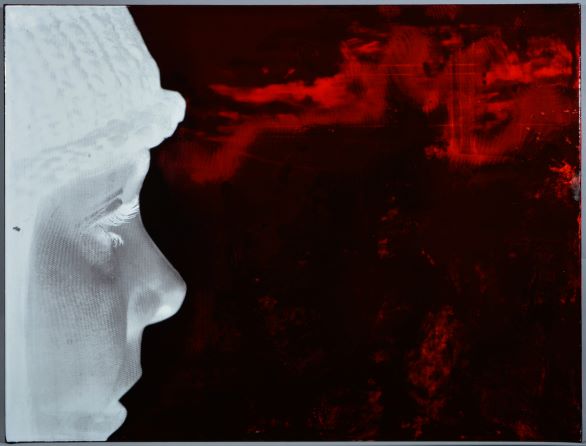 Our last Guest speaker night was accessed by Zoom where our members enjoyed a thoughtful presentation regarding the ideas and work processes of Dr Simon Harris who,alongside his work as Fine Art Course Leader at the University of Wolverhampton, is also a practising painter.

Simon’s passion and research was formulated within the topic of ‘scopic regimes’ (different methods of visual analysis in a painting). Over hundreds of years artists have engaged and reacted with differing surfaces and spaces to create their art.

Simon discovered that over time as the different methods of painting were discovered and used these new methods tended to cancel out what had gone before.  Simon wanted to be able to go back and chose whatever scopic regimes he wanted and find philosophical and conceptual ways to think through these spaces whilst making paintings.

Working with Vermeer’s iconic ‘Girl with the Pearl Earring’, because of its over saturation within all media, Simon began exploring abstract space within painting. After drawing the painting many times and then scaling up the work by scale factor of 3, Simon used muscle memory to convert these investigations into final paintings.

Simon experimented with these images, painting over them, and using different mediums such as Alkaflow and graphite. On returning to a painting that he had left overnight he realised that because the surface had become super reflective the studio behind him was reflected in the painting – another space was being represented.  He had inadvertently introduced a new space into the painting. And Simon loved how in that moment the viewer is reflected in the painting and this moves and changes as the viewer moves ‘the illusion of the real that isn’t fixed’.

Simon’s thoughts led him onto the idea of the dynamic image of cinema and he began to apply cinematic theory to his painting.  In taking these ideas further we now have so many different surfaces and spaces being mediated through the use of photography and film: widescreens, viewfinders, the lens of a camera, and the eye to name a few. Simon also incorporated huge charcoal drawings on chipboard which he would rub out adding to textures and then he applied layers and layers of paint, starting with orange then renaissance gold, and black, constantly sanding each layer removing his presence and allowing the painting to emerge.

I feel myself that I have only ‘touched one surface’ of this fascinating journey that Simon has shared with us. Please take a look at Simon’s website for further information: –

In addition this site will also give you a flavour of some of Simon’s work.

We are very keen to stay in touch with Simon and look forward to a visit to the next exhibition of his work.