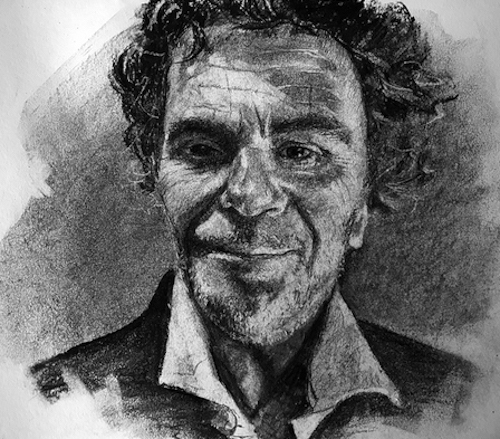 Kevin Williams is a Welsh artist currently living in Wolverhampton. Born in 1960 he grew up in the South Welsh village of Taffs Well, 6 miles north of Cardiff. He has a BA Degree in Visual Communications.

Kevin has spent many years as a professional graphic designer and photographer. He was also Print and Design Manager at Walsall Council for 10 years. Since 2014 Kevin has been a freelance visual artist initially setting up a Visual Communications company called Frank Image Ltd. In 2018 he made the momentous decision to put 100% of his working efforts to painting and drawing and since then he has been prolific producing and selling numerous artworks.

He can and has used all types of media but has developed his oil painting process and generally works in oil on canvas or board. He also works in charcoal. His subjects tend to be landscape although he loves portraiture. Kevin has found his ‘muse’ in the village of his childhood and he has also found a market there. He spends most of his time producing landscape works based there. “I have sold 65 paintings in two years” says Kevin. “I have found that pleasing myself with my work has led to pleasing others. It is really gratifying selling pictures that you love yourself, if a bit sad sometimes to let the pictures go.”

I took the plunge as a full time artist rather late in life but now everything is coming together and I am surviving financially, it feels like it is well worth the risk. The most important thing about all of this”, says Kevin, “is that I am so very happy with my life now I am a full time artist”.

The picture displayed here is a self-portrait in charcoal. It was produced May 2021 in my studio in Pendeford, Wolverhampton.